we were skin to skin,
our heat a ravenous, tangible entity between us,
and I could feel myself thawing beneath it,
softening around the edges,
like the petals of a freshly-emerged flower ready for bloom

we spent hours exploring one another,
all night,
night after endless night

all I remember is white everywhere:
the white glow of moonlight creeping around the edges of the curtains,
the white-hot need bursting behind my eyelids,
the whites of his eyes staring so deeply into me,
his teeth beaming from between his lips in a grin, a growl, a pleasure-pain grimace,
his pale white skin against the soft gray sheets

I’d never known skin could be so luminous and translucent,
a network of purply-blue veins visible just beneath the surface,
like threads of color in white marble,
threads that connected us so completely,
I couldn’t tell where he ended and I began

through flesh and unmetered time,
I absorbed his calm,
his vulnerability,
his joy

I said yes to things I previously would not have;
I reveled in this new person I became,
this less afraid person,
this free person he inspired me to be

we fucked all the time;
I was consumed with lust,
perpetually, urgently hungry for him,
for this coupled metamorphosis

l needed to touch him,
meld with him,
know him,
to shed all the layers of contrived bullshit –
for him to know me

I couldn’t get enough

it wasn’t silence exactly,
his “I don’t know’s”,
nor were they words of optimism,
promises of intent, of partnership

they pressed against me like lead,
those words of indifference,
a mirror reflecting myself back to me,
the voice in my head louder than the silence in the room 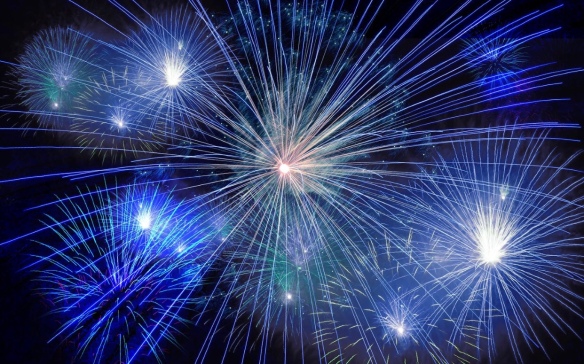 The phone rang, and as the foreign voice on the on the other end began its sorrowful explanation, there was no air, only a sinking, limb-tingling fear disguised as anger. Questions ejected themselves from back of my throat in a stream, but I cannot recall any of them.

After the doctor delivered the news in person, I stood there, stunned. In my peripheral, I could see the glow of colors exploding in the sky just outside the large window next to his bed, and it registered that it was the 4th. The rumbling vibration of each detonation seemed to originate from somewhere inside me.

Once I arrived home, though I desperately needed the sleep, there was very little. I tossed and turned, and tossed and turned. Finally giving in to it, I got up early, dressed and returned to him.

As I walked down the stark, institutional green hall, each step brought me closer to seeing with my own eyes what had been conveyed in words the day before, the weight of those words sinking like quicksand to the pit of my stomach.

I was acutely aware of the clinical smell surrounding me, the smell of sickness, the stench of sadness filling first my lungs, then permeating outward, finding an unwelcome home in my veins, thick like sludge, coursing and thumping.

I could hear the cries of sorrow in the bated breath wafting from some of the doors I passed. I could taste its metallic tang on the tip of my tongue. And as I arrived at the doorway of the room to which I needed to enter, I felt it in my bones, in my marrow. When I opened the door, I became its embodiment.

The few steps to the bed took me years:

I passed myself snuggled on his lap as he read to me for the millionth time, Put Me in the Zoo.

I watched as I sat between he and my mother on the yellow paisley couch, as they tried to explain why we would no longer be a family.

I saw the desperation on his face as he finally allowed me to call my mother, but would not yet let me go home to her, still.

I remembered tearing open the Christmas wrap to see the purple down coat I’d wanted so badly, the yolk-only egg sandwiches on Sunday mornings, and stove-popped popcorn with a rented movie on our every-other Saturday nights.

I saw his suntanned, orange-tinted left arm that was darker than the rest of him from hanging out his truck window, his splashing in the pool and volleyball in the summer, and helping my step-brother with homework at the kitchen table while he looked on drinking Pepsi from a two liter bottle.

I remembered the wishing I belonged, that I fit with them differently, more.

The coughing, I remembered the coughing that just kept getting worse, the constant handkerchiefs in his pockets and on the end table with his Winstons next to his chair, the red-faced breathlessness and the wheezing. And the fear in his eyes.

I remembered the devastating, life-altering heartbreak and the disappearing and the wondering, the worry and the doubt. The reconnecting and the doctors and the testing.

And finally, the hope. The hope which had fizzled away the night before with every sizzle and crack, hiss and bang and pop.

Standing next to the impersonal-feeling bed, I gripped the cold, stark metal of the railing with both hands, trying to take in all that I saw. The blinking and the beeping in the semi-darkness, the machine whose trepidus noise filled the room.

Eerily loud and unwelcome, it was reminiscent of the sounds heard outside the window the night before.

My eyes ran the length of the shiny metal pole on which the machine was mounted, down to the swiveling wheels which allowed it to be maneuvered to where it was needed. I noticed the simple black cord which extended to the wall.

How could such an ordinary-looking plug hold life in the balance?

Letting loose my grip a bit, I became deftly aware of my own breath, in and out, of my own heart beating, ga-gong, ga-gong, so loudly in my chest that it rang in my ears.

Reaching out, I rested my hand on his chest, feeling the unfamiliar, robotic rise and fall. I felt the cool absence, the force of what would not be. And then I looked up, nodded my head, and closing my water-filled eyes, I felt with the lengths of my fingers, with the lifeline in the palm of my hand. With my very soul.

The robotic gave way to an arhythmic slowing:

And he was gone.